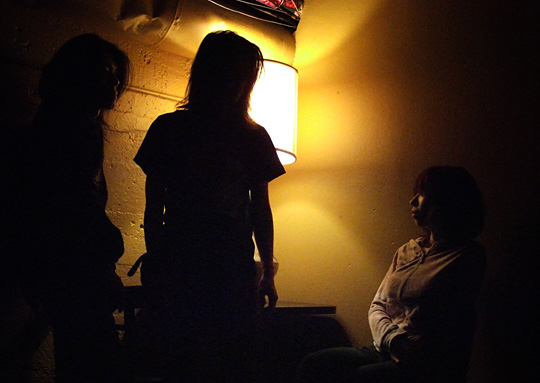 The Japanese masters of drone and analog feedback — Takeshi (guitar, bass, vocals), Wata (guitar, echo) and Atsuo (drums, percussion) — never cease to amaze us. Fans actually never know what to expect from a new album. Sludgy guitar riffs, super distorted psych rock or mighty minimal drones? Just be prepared for a new masterpiece, the way only they seem to do it.

"Boris are the only living band who have mastered the art of out-Sabbathing Black Sabbath. Obviously, a ton of groups play in that crushing, occult style, and many do it quite competently, but only Boris have been able to consistently break on through that wall of rock into the experimental wasteland that lies beyond. And, once there, they thrive." (Dusted Magazine)

"Things start with a slow slow build, drones and rumbles and huge sheets of distorted guitars, weaving a heaving tapestry of sonic unrest, a static buzz that towers over you like an ancient stone wall, threatening to heave forward, bricks of sonic sludge crushing you beneath their suffocating weight. The big surprise though comes in the second movement as the wall of sludge dissipates into the ether, leaving a smoky hazy gauze, through which Boris emerge, as an almost-pop band, simple spare drumming, heavily reverbed shimmery chords, subtle muted wah guitar with a distant swirling backdrop of wind tunnel effects and howling feedback. Then vocalist Takeshi joins the fray with mumbled, keening sad boy vocals reminding us of Greg Dulli in his Afghan Whigs days, and then drums get all dubbed out, and suddenly everything is druggy and trippy, like the whole record was soaked in cough syrup. All the while Boris' guitar goddess Wata spits out super distorted leads, all melancholy and emotional, strings bending, feedback threatening to overwhelm the notes. The mellow parts definitely remind us of Codeine, which is a VERY good thing. Also, Windy and Carl, the Wipers a little, and even that eighties Homestead records sound. But it wouldn't be Boris if things didn't get HEAVY. And they do. Really heavy. The rest of the record is an aural tug of war between Boris' Earth/Sunn 0))) doom tendencies and their gorgeous, shimmery, druggy psychedelia. Imagine Godspeed You Black Emperor, raised on doom metal and seventies psych, and fronted by a female Hendrix! It's that fucking amazing." (Aquarius Records)