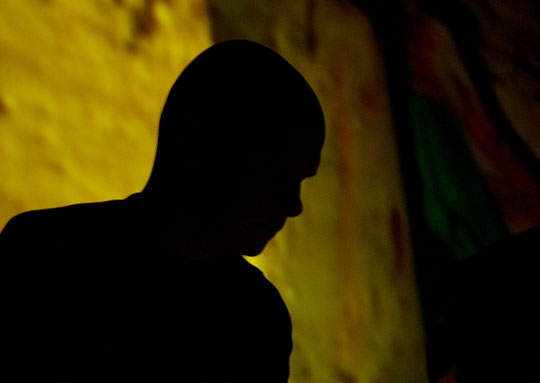 Pure nordic genius, Peter Andersson is the talented man behind Raison D’être and a number of brilliant musical projects like Stratvm Terror and Necrophorous, each one with a very impressive and distinctive sound. Experimenting with Atomine Elektrine since the early 90’s, the main influences to create this project came from the old krautrock school in its more cosmic and electronic side represented by artists like Klaus Schulze, Kraftwerk and even Neu!.

Incorporating ideas coming from various other sources, like the orchestral Cold Meat-ish trademark of the time and the sacral beauty of Raison D’être, Atomine Elektrine came out as a peculiar mutation of the kraut heroes; more rhythmic and a bit less experimental and far-out than expected. A new form of life.

"When we first agreed about doing something about this old Atomine Elektrine material, both Essence Music and I insisted in having as good sound as ever possible for the Binomial Fusion release. My first plan was to re-mix all and every track, but on a second thought I recollected that this was not a good idea. All the original 8-track tapes from the "Elemental Severance" recording session had been re-recorded and replaced by the death-industrial noise of Brighter Death Now (Cold Meat Industry). Some leaking sounds from the Atomine Elektrine even appear on an album of Brighter Death Now.

At that time, around 1992-94, I used an Atari computer with midi sequencer software, so I got another idea of finding the sequencer data and the midi triggered sounds for all the tracks. But that didn't work very well. Some new problems occurred: Firstly, for most of the songs, some of the used instruments were missing, they had been sold and it was not possible to re-create the missing sounds of those instruments. Secondly, for the remaining tracks, which seemed only to use instruments I still had in my possession, and there was a possibility to do a re-mix for those tracks, but my old Atari monitor didn't work and the mouse was not functioning properly. Instead I tried to transfer the old sequencer data of these remaining songs to my new computer environment which I use in my studio today, but since the Atari disc format is not readable on PC with new Operating Systems I had to do an install an old OS which I know could read those floppydiscs.

So, after some troubles I succeded in translating the old Atari sequencer data into the PC environment. But when importing these tracks into the PC some of the vital track information such as sound program number and used instrument were gone. I had to boot my Atari computer, now connected to a TV screen, and load the corresponing sequencer data to look for the missing track information. But now what, the TV screen resolution let me only see a little portion of the original screen size, so I had to scroll with a broken mouse, and it took hours just to scroll and find the needed information.

Anyway, only two songs on the original "Atom Xtension" CD-R have been re-mixed using the above method. All other tracks have been carefully re-mastered. I have gone back to the source masters whenever I could. However, for the "Elemental Severence" CD the DAT-master was missing so I had to use a pressed CD as source. Using the source master may sound that these songs will be in tip top condition, however, that is not the case. Except for "Elemental Severance", only the seven last songs on "Atom Xtension" have been recorded using DAT as a master. All the remaining tracks have been recorded on various stereo cassettes using bad tape recorders and old used tapes. These recordings were only intended for my own listening or as demos at most, and never intended for a CD release. When I mixed those tracks back then I compensated for the bad PA monitors which resulted in distortion in the mixer especially of gained low frequencies. I didn't adjust the recording level properly either which often resulted in distorted recordings. During the pre-mastering I have tried, as long as it is possible with that kind of sources, to compensate for all the flaws in the mixing of the original recordings.

With all this in mind, I believe I succeded to do a great job with the pre-mastering for the Binomial Fusion. This old Atomine Elektrine material sounds now better than ever before."