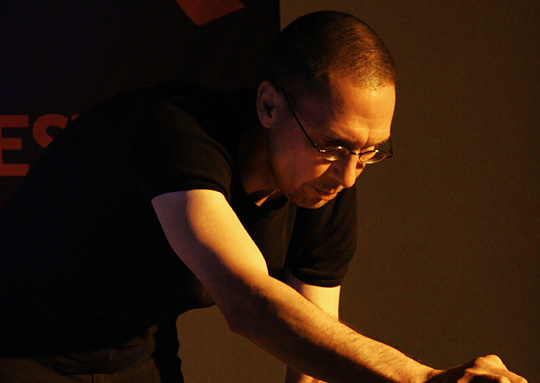 Robin Storey is a founding member and the real creative force behind the legendary experimental collective :zoviet*france: and has been actively recording and performing for more than 30 years – since 1992 under the Rapoon banner –, always keeping an extraordinarily high quality control based in his very own trademark – the creation of mesmerizing ethnic based soundscapes. Every Storey release includes a world of its own.

"Some have it, and some don't. Robin Storey, both a founding member of the legendary :zoviet*france: and the mastermind behind Rapoon, clearly 'has it'. Everything I've heard from him is distinguished by its striking consistency and clarity of purpose... Superficially, you could label Rapoon's music 'ambient industrial' with an occasional touch of ethnic (eg. tabla and oud samples). But all these ingredients are in common use today; it's the choices Storey makes that set him apart." (The Alternative Press)

"As Rapoon, ex-:zoviet*france: member Robin Storey specializes in experimental atmospheres and post-industrial sound rendered with gripping effectiveness. Unlike his former compatriots Storey's hypnotic mantras aren't drawn from esoteric sound sources. It's obvious that he makes extensive use of sampling, tape manipulation and looping, but the music of Rapoon is more structured, less chaotic, even tribal, in the way archaic cultures used repetition and 'minimalism' to broach their message to deities unknown." (i/e Magazine)

Robin Storey reveals his favorite albums of all time